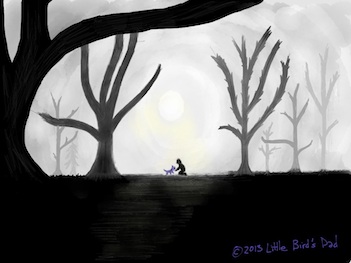 “Why Are There No Blue Dogs?”

Tuesday night, after the night shift nurses in the Hospice had dimmed the lights so everyone could settle in for the night, and after everyone left his side,  my Uncle Joe quietly passed away.

I never really got why folks were so impatient with Joe.  A lot of folks thought he was stupid – retarded was not an uncommon description.

In reality, he was just a goofy man.

His favorite question – to anyone who would listen – was “Why are there no Blue Dogs?”

We all have ways of sizing people up, and I think this question was just Joe’s way.  If you took the bait, and genuinely enjoyed the “Blue Dog” bit, Joe would open up, laugh and joke around.

But if you had no time for such nonsense, Joe kept you at arm’s length: he was polite & civil, but never really open.

Joe was a hard worker: he diligently “punched the clock” for 30 years as a Federal employee.

I don’t know all the jobs he did. For a while he ran printing presses at the Government Printing Office.  He spent his last few years “on the job”  – first as  worker and then as a volunteer – pruning the roses and helping to grow exotic plants at the National Arboretum.  He loved gardens and plants: the tomato vines he grew stretched 15 feet in the air, ran over the top of Grandpa’s garage, and down the other side.

I never saw an insect or bird steal a single one of his tomatoes – how they resisted the biggest &  juiciest & reddest tomatoes is a mystery to me.

Joe had a sense of humor, though most didn’t “get it”.

As a kid, I collected coins.  One year, for my birthday, Joe wrapped up $50 worth of pennies in a handkerchief,  tied it up with a bow made of garden twine, and dropped it in my lap.  There were old pennies, new pennies, wheat pennies and clipped pennies, steel pennies & Indian-head pennies – thousands of pennies.

While some called that gift “stupid” and shamed Joe for giving it, it really made me think.

$50 is a lot of money to me now – as a 10 year old, it was a large fortune. I had to decide which I wanted more:  THOUSANDS of coins for my collection, or the $50  I could get by counting them up, rolling them and taking them to the bank to cash them in.   [Can you guess what my choice was? What choice would you make?]

Joe went to confession or church every day for 75+ years.  Never once did he talk to a single person besides his dad and his priest about God, or religion; he never tried to push his beliefs on anyone else.  God was something Joe wanted to experience on his own terms.

Joe was generous. He loaned me some money to help pay for food when I was a starving law student.  After I passed the bar, he told me not to pay him back.   A few years later, he gave me some money to start my law firm, asking only that I be a “good lawyer”.

He was a good guy.

Nobody ever knew what condition Joe “had” or what was “wrong” with him.  If they did know, they never said.

We were told his umbilical cord had been wrapped around his neck at birth, and he had brain damage from the loss of oxygen.

Speech was very difficult for Joe.  He spoke with perfect precision and enunciation, but had to contort his face into any number of shapes to turn thoughts into letters, letters into syllables, syllables into words, and words into sentences.

For all that work, Joe made sure  each word counted.

He had an uncanny ability to remember things in excruciating detail.   Some folks thought he might be autistic, although his brother (my dad) and his dad (my grandfather) both have the same “gift”.

When I packed up his house to move him into an apartment 20 years ago, I found 500 reprints of a single Readers’ Digest article wrapped up neatly in a box.  On every copy of the article, Joe had underlined the same sentence in a red ballpoint pen –  with remarkable free-hand precision.

Some folks thought he had an obsessive compulsive condition. If they stopped to read the sentence he underlined, they’d have known he was just overwhelmed by loneliness in the years after he retired, and after his Mom and Dad and big sister had passed away.

The folks that tried to put a label on Joe – or that tried to find a nice little box to tuck his personality into –  never got to know him as a person. In some cases, they didn’t even know he was a person.  To many of them, he was the guy with the intellectual disability.  To some, he was the  retard.

I haven’t seen Uncle Joe much over the past 20 years.  The year he moved into an apartment in Maryland, I joined the Army, ultimately settling down 1,500 miles away, in Texas.  Joe doesn’t use phones or computers, and I was just too damn busy or too damn important to write a letter.

I should have bought him a train ticket to come visit us in Texas.  He loved riding trains. Why didn’t I do that.

This past April, I took the time to introduce Momma Bird and Little Bird to Uncle Joe.  I was nervous when I went to see him –  many layers of guilt had gimped me up.  He didn’t look very good.

I wondered if it would be the last time I saw Uncle Joe. Turns out, it was.

Uncle Joe, I will miss you.

I hope like hell you find that Blue Dog.